Toyota Promises Something Special For Chicago

Toyota is teasing the automotive media heading into next month's 2020 Chicago Auto Show, with a press release cryptically promising "a touch of nocturnal mischief" that hints at new off-road truck variants set to debut at the event. Accompanying the release was a tight image of a black Toyota Tacoma wheel kicking up some dirt. Judging from the wheel design and matte black fender cladding, we're guessing it's a Tacoma TRD, or something like it.

What does all this mean? We have no idea, but we suspect that the "nocturnal mischief" alluded to in Toyota's press release could be a reference to a Nightshade Edition appearance package, like those offered on the Camry, Corolla, and 4Runner.

"The forecast for the Windy City looks sporty and outdoorsy, with a touch of nocturnal mischief as Toyota debuts new variants to the portfolio," reads the automaker's official release. Frankly, we don't know what else to make of that.

Toyota's other Nightshade Edition vehicles feature blacked-out badging, all-black grilles, plenty of black exterior trim, and yes, black wheels. Toyota just refreshed the Tacoma for the 2020 model year, so it might be the right time to debut a new special edition package or two. Of course, the automaker might also have one or two additional Nightshade Edition vehicles up its sleeve, and the use of the word "sporty" is enough to make us wonder whether they might be hinting at a Toyota 86 Nightshade, although we won't hold our breath.

The 2020 refresh for the Toyota Tacoma was relatively small in scope, gracing the truck with an enlarged infotainment touchscreen with compatibility for Apple CarPlay, Android Auto, and Amazon Alexa. Striking new LED daytime running lights and headlamps are also available, depending on trim, but overall, the appearance remains essentially unchanged.

Toyota will hold its Chicago Auto Show press conference on Thursday, February 6th, after which we'll have more information to share. Stay tuned. 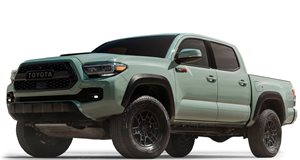