The downsized engine option only provides 157-horsepower. That's down 113 ponies from the originally 4.0-liter V6, while combined fuel economy is within one mile per gallon of the more powerful engine. It's easy to see why customers overwhelmingly are opting for the far more powerful V6 if taking away 1.3-liters and 113-horsepwer only nets you a fuel economy gain of one mpg.

Check out more information about the 4-cylinder SUVs. 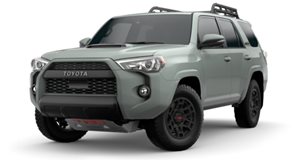