Toyota To Introduce Series of EV's Into Their 2012 Lineup

Toyota is set to introduce additional EV's to their 2012 lineup. The Prius PHEV, RAV4 EV and Scion iQ EV mini car are all set to debut next year as part of Toyota's continued efforts to become a dominate force in green friendly vehicles.

Toyota will soon be launching an electric and hybrid car frenzy to stay ahead of the competition and to display their technological advancements. The Japanese automaker will be introducing several models to their current electric family such as the Prius PHEV, RAV4 EV and Scion iQ EV mini car. The first model Toyota will be introducing will be the Prius PHEV which contains a lithium-ion battery pack that will produce 12 miles of emissions-free driving before operating like the standard hybrid.

The downside is that the Prius PHEV will not get the same efficiency as its rival Chevy Volt; however, it will be priced just slightly higher than the standard Prius. The result is a more mainstream model that's also cheaper than the Volt. Toyota also joined forces with Tesla Motors roughly a year ago and displayed the RAV4 EV Demonstration Vehicle at last year's LA Auto Show. Full use of the battery technology was displayed in order to help "fuel" interest in the EV. There is a downside, however, as it weighs 220 pounds more than the standard RAV4, but manages to still provide the same spacious cargo space.

The RAV4 EV should have roughly a 100 mile range. The final model to be unleashed is the Scion iQ EV, with a gas-powered version coming to market later this year. The Scion iQ EV's lithium-ion batteries will be located under the floor to improve the car's center of gravity. Toyota is targeting around a 65 mile range for the Scion iQ EV. Toyota will also be introducing a smaller luxury crossover for Lexus dubbed the CX300h. It will draw from the success of the larger RX and most likely share the same platform as the RAV4, which currently has no hybrid powertrain.

The CX300h will go against rivals such as the Mercedes GLK, BMW X1, Infiniti EX and the Audi Q3 to compete in the rapidly growing luxury compact crossover department. Photos displayed are of the 2010 Scion iQ Concept 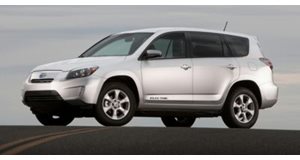