The larger Tiguan model will be unveiled at Detroit.

It seems like ages ago that Volkswagen said it would build a seven-seat version of the Tiguan crossover. That is because we have known about the car since 2014. Volkswagen's SUV range has been pretty lacking in the US because the Tiguan was too small for most US buyers and the Touareg was too expensive. When Volkswagen announced the new seven-seat Atlas, we thought that the larger Tiguan model would be collateral damage. However, VW has now announced that the seven-seat Tiguan will debut at the 2017 Detroit Auto Show.

In Europe, this new Tiguan model will be given the added designation "Allspace," while North American models will simply be called Tiguan. The Allspace will, as the name suggests, have more interior space and a longer wheelbase than the current model. Hopefully, this new model will coincide with a facelift for US models. The Tiguan received a handsome redesign in Europe with an accompanying interior refresh, which were big improvements over the dated US-spec. For example, the new Tiguan has a version of Audi's virtual cockpit which adds a nice touch of technology to the car. In the US, the new Tiguan will compete with crossovers like the Nissan Rogue that offer an affordable alternative to expensive seven-seaters.

Expect to see VW's 2.0-liter turbocharged four-cylinder under the hood, with diesel engines likely limited to Europe. VW appears to making the right decisions to improve its image in the US, and an affordable, seven-seat crossover is the perfect model to win back US consumers. 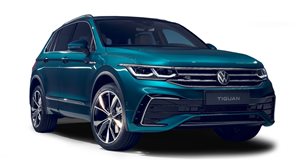