The five-year old ES Sedan's replacement is something we've been expecting to see for some time now, but China was not where we expected to find it. What's arguably even more surprising is that it reared its head in production form with virtually no camouflage. Taken at a port, the leaked pictures of two 2013 ES are spreading like wildfire across Chinese news car sites likely to be used for promotion or dealer-training in the coming weeks.

The luxury sedan is set to simultaneously debut this April at the Beijing Motor Show and the New York Auto Show. This is most likely the Chinese market version, but the North American model that will follow won't be remarkably different. As with all its predecessors, the sixth-generation base sedan shares the Toyota Camry's chassis, in this case with the 2012 model, but sports its own sheetmetal, has a more swoopy rear and gets the Lexus corporate face and spindle 'hourglass' grille. LED running lights adorn both the headlights and taillights, while dual exhausts have also been fitted.

Inside, a more modern interior design features a simple, yet elegant, center stack, with plenty of GS elements on show in the reworked cabin. The pictures scooped by Autohome is of the ES 250, which houses the smaller 2.5-liter V6, but in the US the ES will probably be available with Lexus' 3.5-liter V6 ES 350 and perhaps even a new hybrid model. 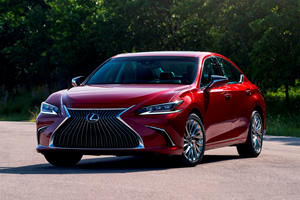