This was before GM ruined the brand that began its eventual downfall.

There was a time when the Oldsmobile Cutlass was cool. By the time now dead GM brand retired the name in 1999, the car was nothing more than a bland sedan that appealed to those who wanted something like a Toyota Corolla but couldn't stand the thought of not buying American (we all know a few). That final generation (the sixth) embodied nothing of what the car used to be back in its and Oldsmobile's heyday. First launched in 1961, the Cutlass started off as a compact car available as a sedan, coupe, and station wagon.

It wasn't anything amazing, but it sold well enough for GM to continue developing it. That is until Ford launched the Fairlane in 1962, which forced GM to reexamine their compact car lineup. The second generation lasted from 1964 until '67, but this was an important time because it moved to a body-on-frame chassis instead of the previous unibody construction. However, it was the third generation that debuted in 1968 that really brought the Cutlass out of the old and into something actually interesting. Not only was it completely restyled, but the coupe and sedan models each rode on different wheelbases.

In turn, this made it possible for each to have more individual styling; the coupe had a semi-fastback design and a large rear end. The following year the Cutlass was given the Oldsmobile trademark split grille with vertical bars as well as vertical taillights. Because this was the muscle car era, Oldsmobile continued to offer a lineup of V8s, ranging from 5.7 to 7.46 liters. By this time, Cutlass buyers could choose not only the coupe, sedan, and wagon, but also a convertible. 1974 saw the introduction of the car's fourth generation, which was built on GM's latest A-body platform. While the optional V8s continued, the convertible was discontinued.

Styling wise, GM kept its aggressive lines and continued to move the Cutlass line upscale by offering features such as an uprated suspension, reclining bucket seats, and radial tires. Modest changes continued until the fifth generation was launched in 1978. And that's where we'll stop this Cutlass history because this is where it morphed into the preferred choice for Florida retirees who couldn't quite afford a Caddy. Although it was redesigned again in 1982 when the Cutlass name was turned into a sub-brand within Oldsmobile, the name would never again carry the essence of style and power in a single package that it once did.

Fortunately, the owner of this gorgeous 1971 Cutlass coupe knows how to keep the nameplate's best years alive. Powered by a 5.7-liter V8, it's mated to a three-speed automatic transmission with the original console shifter. While the front end had to be completely rebuilt as well as adding a new dual exhaust, the body is all original with no rust. Even the floor pans and trunk floor are original. The undercarriage is in solid shape and the bumpers are show quality. The vinyl top is also original and we think the rear spoiler is yet another great touch. Overall, the interior is in good shape with the steering wheel, dash and gauges all being original.

The buckets front seats as well as the rear have been recovered with crushed velour. With a little over 73,000 miles on the odometer, the owner claims the Cutlass runs great and attracts attention everywhere it goes. If Oldsmobile continued to build their cars like this in the years to come, perhaps we wouldn't be talking about the brand in the past tense today. Photos courtesy of mcizer.

First Drive
7
2021 Toyota Corolla Apex Edition First Drive Review: The Sharpest Corolla Yet
But is it what buyers want? 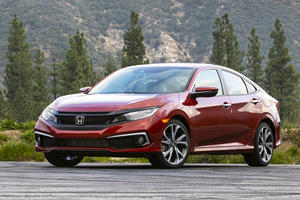