Short of a full redesign, this facelift promises some nice styling upgrades.

This is definitely something Mercedes-AMG doesn't want us to see just yet. All in good time, of course. But thanks to Instagram account "CocheSpias", we now have our first look at the new taillight design for the facelifted 2021 Mercedes-AMG E63. The exact location as to where this photo was taken remains unknown, but there's a good chance it was taken in Germany where the current generation E-Class is built. This is clearly a completely camo-free photo and we can get a good look at the refreshed rear-end styling.

Instead of the current vertical-style, there's now a more horizontal look. It's also fair to assume these are LED lights, once again. Also notice how the restyled rear lights merge onto the trunk lid to create the visual impression of a wider rear end.

This design is also in line with the rest of the new Mercedes lineup. There's also no reason not to assume the rest of the E-Class lineup, which Mercedes just began teasing, won't feature this styling update as well. Along with the taillights, there's an updated chrome bar going across the entire length of the trunk lid which now directly connects to the taillights. Previously, it stopped just before reaching them. Like before, the rear spoiler and diffuser remain.

There is, however, some slight changes to the quad exhaust system as the tips seem to be a bit different with each oval having its own housing instead of them sharing a single housing unit.

Because this image is not of the highest quality, we're not sure for certain whether this is the E63 or E63 S. Chances are, the updated front end will feature the brand's slick Panamericana grille. So, when will the 2021 Mercedes-AMG E63 and E63 S make their official debut?

Expect the standard E-Class to come first, specifically at the 2020 Geneva Motor Show this March, while the high-performance AMG variant to come at the end of this year or early next year. 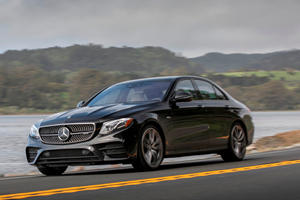