This is the first time the US version of the Hyundai Ioniq 5 has been caught on the move.

The Hyundai Ioniq 5 is one of the most stylish electric cars we've seen in a long time, sporting a unique, retro design inspired by the 45 Concept. We recently got a glimpse of the production model in unedited photos, and it looks incredible in the metal.

Now, for the first time, YouTube channel CarSceneKorea has caught the stylish electric crossover (Hyundai insists it's a midsize crossover even though its proportions resemble a hatchback) on the move on a highway in Korea after spending two weeks hunting one down. This is the first time the US version of the Hyundai Ioniq 5 has been spotted in the wild, and it has some subtle changes compared to the South Korean and European versions.

The YouTuber managed to get up close and personal with an Ioniq 5 finished in Shooting-Star Gray Matte while it was parked up being charged. Taking a closer look at the front reveals that this EV has orange reflectors in the headlights, indicating that this is the US version.

Curiously, the prominent Ioniq 5 lettering on the back of the South Korean model has also been removed for the US version. This could change when the Ioniq 5 goes on sale in the US, however, since we're looking at a pre-production model. After waiting patiently for the test driver to return, the YouTuber managed to film the Ioniq 5 driving off. As it leaves, another Ioniq 5 prototype finished in Gravity Gold Matte pulls up to be charged. Clearly, it was this die-hard Hyundai Ioniq 5 fan's lucky day.

He then proceeds to follow the prototype onto the highway to capture footage of the stylish EV on the move. Most test drivers aren't happy being filmed driving pre-production prototypes, but the Hyundai test driver waited for them to arrive and start filming. After all, this is great exposure for Hyundai in the run-up to the Ioniq 5's US launch this fall.

When it goes on sale, the Hyundai Ioniq 5 will be available with either a single or dual-motor setup. With AWD, the dual-motor version produces a combined 301 horsepower and 446 lb-ft of torque. This setup enables the Ioniq 5 to accelerate from 0-62 mph in 5.2 seconds before topping out at 115 mph. With 2WD, the Ioniq 5 will last 292-298 miles based on the WLTP cycle, but America's EPA rating will likely be lower. 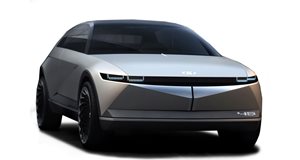