Pikes Peak is only two months away.

Only a few days ago did Volkswagen reveal in full its all-electric I.D. R Pikes Peak race car, and today the automaker has declared official on-track testing is underway. The timing makes sense given the fact the epic and brutal hill climb is happening on June 24. Volkswagen says testing for the "fully-electric super sports car" is taking place in Ales, France. The prototype has a full schedule of testing in both Europe and the US that'll take it literally right up to race day.

Romain Dumas, who will pilot the race car at Pikes Peak, is also at the helm during all of testing. After completing his first lap, the three-time Pikes Peak hill climb winner said: "What Volkswagen has managed to put together from scratch over the past few months has my greatest respect. I had obviously seen initial pictures of the car – but it is even more spectacular in the flesh. We now have a packed schedule of testing ahead of us, and I am looking forward to every meter!" Powered by a lithium-ion battery pack, this thing has a total of 680 hp and 479 lb-ft of torque thanks to its pair of electric motors. We don't know just yet exactly how fast it is, other than Volkswagen telling media it's faster than Formula 1 and Formula E cars.

The only figure we can confirm is that it'll go from a standstill to 60 mph in only 2.25 seconds. Total weight is around 2,500 pounds. Like most race cars, think of the I.D. R Pikes Peak as a test bed of sorts for what future high performance sports cars from Volkswagen could be like, technologically and performance wise. 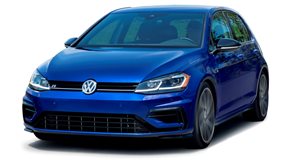