Volkswagen ID.6 Could Come To America After All

But you'll have to wait for the official debut, first...

Volkswagen, as with so many other automakers, is shifting its focus to electric vehicles, and its range of ID cars is set to lead the German manufacturer to the head of the electric pack. The ID range of electric vehicles includes the ID.3, the ID.4, and the ID.6, the latter making its debut in April of this year. We last saw leaked pics of the ID.6 in February, showing the Tesla Model Y's rival's three-row seating and shapely bodywork, and since then we have come to learn a few more details about the car, but key pieces of information are still missing, such as power outputs and range estimates. Those questions will be laid to rest when the new VW makes its international debut at the Shanghai Auto Show in April.

According to sources, who revealed information to Automotive News Europe, Volkswagen will be showcasing two versions of the new eclectic SUV, namely the ID.6 X and the ID.6 Cross. Both cars will be manufactured in China to cut costs. "With the ID.6 X and ID.6 Cross we are presenting at the Shanghai motor show a seven-seat SUV especially designed for the Chinese market," said Ralf Brandstaetter, VW brand CEO. There is good news and bad news for the West: Volkswagen is considering bringing the ID.6 to the US, as a spokesperson for the company recently told reporters that it is "conceivable". The bad news is that it doesn't look as if the ID.6 will be making its way to Europe any time soon.

So far we know that the ID.6 will share its MEB electric vehicle platform with the rest of the ID family of cars, and will offer a maximum range of about 280 miles and produce around 300 horsepower. Expect production to begin soon after the official debut. With any luck, the ID.6 will be making its way to our shores by the time 2023 rolls around. Until then, Volkswagen's first ID product in America, the VW ID.4, has been laying down the solid groundwork and left us highly impressed in a recent test drive. 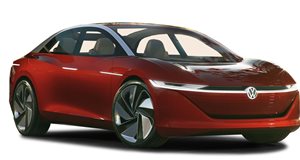