This is our best look yet at the reborn icon.

Now that the Volkswagen ID.4 has launched and the ID.5 has broken cover, the ID. Buzz will be the next electric VW reveal. An all-electric spiritual successor to the iconic Microbus, the ID.Buzz was first shown as a concept way back in 2017 at the Detroit Auto Shows. Fast forward four years later, and the ID.Buzz is nearly ready for production.

During the ID.5's reveal, the ID.Buzz made a cameo appearance in an official VW video, with the German automaker promising to reveal the final production model in early 2022. Before its global debut, our spies have caught VW testing a prototype of the ID.Buzz in the Alps.

Aside from some tape covering the badging, headlights, and taillights, the prototype is completely undisguised, offering our best look yet at the ID.Buzz. The autonomous sensors fitted to the prototype we spied last month have also been removed.

The ID.Buzz will be available as either a cargo or a passenger van. This prototype is based on the latter, which will be the only version offered in the US. Compared to the original concept, the production version has sleek LED headlights connected by a central light bar and a smaller honeycomb grille. We can see the charging port on the right rear fender and plastic cladding covering the side profile to protect the prototype during winter testing. We hope this makes it to protection as it gives the ID.Buzz a more rugged appearance.

At the back, the taillights merge into the rear fenders. The final production model is expected to offer three rows of seats, but we don't have any new shots of the interior to confirm this. Recent spy shots of the interior showed the ID.Buzz will borrow tech from the ID.4 including a digital gauge cluster and a large touchscreen. Like the ID.4, the ID.Buzz will also ride on VW's MEB platform.

This means it will likely be offered with a single electric motor producing 201 horsepower or a dual motor setup providing AWD and 295 hp. Based on EPA estimates for the ID.4, the more efficient RWD ID.Buzz should have around 260 miles of range, but more details will be revealed when the ID.Buzz breaks cover early next year. 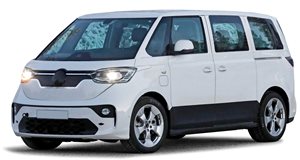