Patent documents and official comments reveal that VW has an interest in the EV truck, but production may be years in the making.

Recent reports from Europe suggest Volkswagen has filed patents for a pickup truck based on the all-electric ID.Buzz. This is according to Germany's Auto Bild, which reports that the automaker has confirmed the patents' existence. But before you get excited, remember, this doesn't actually mean a four-door electric truck is on the way.

Instead, the VW Group is exploring how viable the potential offering is and seeing whether there is space for such a vehicle in a crowded commercial segment. Volkswagen is expected to launch a commercial variant of its electric van, so the idea of a pickup variant isn't entirely out of the question. VW even teased a design concept (below) on Twitter earlier this year.

After all, the automaker has a long history of offering van-based pickup trucks, so why should Volkswagen stop doing so in the electric era? Well, in an exclusive interview with CarBuzz, VW America's Hein Schafer said an ID.Buzz-based pickup may prove tricky.

"I think probably the old-school T2 double cab pickup concept might be a little bit quirky for ID.Buzz," he said. "We are already looking at how we can modify [the MEB] platform to get the ride height up, to get the off-roading capability slightly better, to get the towing capacity, to get the carrying capacity so that we can produce a real, reputable pickup truck."

However, as Schafer pointed out, those changes would greatly interfere with vehicle efficiency and travel range. If the ID.Buzz does sprout a truck sibling, it's highly unlikely that it would make its way over to the United States. Based on VW's rendering, the proposed commercial vehicle would be too compact for American tastes.

It's a similar story with the Amarok, which has also been ruled out for a local introduction. However, that doesn't mean Volkswagen has ruled out the possibility of introducing a truck in the USA. "I think if we do bring [a truck] to market, we want to bring a real competitor versus something that could be a 'wannabe pickup,'" added Schafer.

Interestingly, it's the Rivian R1T that piques the interest of the Product and Strategy executive, who continued by saying, "I'd say Rivian's done a relatively decent job of putting something out there with proper ground clearance, good 4x4 capability, and good functionality, so I think that something that's down that channel would be our number one priority."

VW will likely head down the electric route if it were to introduce a pickup truck in America. Perhaps the aforementioned ID.Buzz truck will remain the reserve of European markets. Local buyers may be catered to by the revived Scout nameplate, a VW-owned brand that plans to introduce battery-powered trucks and SUVs.

For now, the facts are these: Volkswagen has filed a patent for an ID.Buzz-based pickup, but developing a concept is still far off, let alone a production version.

Today is World #DesignDay??
On the way from an idea to production, there are a lot of unseen design drafts made – like this one:
An #IDBuzz pick-up!

What do you think about it? 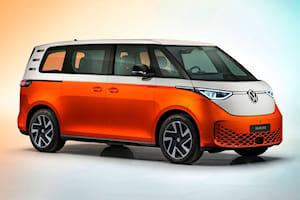