Volkswagen has been working on bringing its electric ID.Buzz van to the market for quite some time. We've spotted the funky little bus a few times this year already, with our most recent sighting showing an almost production-ready vehicle. Volkswagen has announced that there will be various versions of the van, and now we've been given a glimpse of what to expect from one of these versions meant for ride-pooling. Unveiled by Volkswagen's commercial arm in collaboration with Argo AI and VW subsidiary MOIA, this prototype shows how an autonomous ride-sharing vehicle can be used to relieve congestion in cities.

The ID.Buzz prototype is fitted with the Argo self-driving system which uses cameras, radar, and lidar to generate a 360-degree view of the world around the car, taking note of the surroundings and predicting the actions of pedestrians, cyclists, and vehicles. Volkswagen says that this information is used to "direct the engine, braking, and steering systems so that the vehicle moves safely and naturally, like an experienced driver."

The system is advanced enough to detect objects from a distance of almost a quarter-mile and its patented Geiger-mode technology can even detect particles of light as small as a single photon, thus allowing the system to detect dark cars and map the tiniest details of the surroundings.

As you can see, the system is very advanced, so the next step of the process is to launch a self-driving commercial ride-pooling service with MOIA. The idea behind this is that, not only will people be using fewer vehicles, but the vans used for the service will also be able to drive far more efficiently than a human. These two factors mean that city congestion can be greatly reduced.

"An environment recognition system from six lidar, eleven radar, and fourteen cameras, distributed over the entire vehicle, can capture much more than any human driver can from his seat," says Christian Senger, who runs the autonomous driving division at VW Commercial Vehicles.

MOIA already offers an all-electric ride-sharing service with drivers and, in 2025, aims to introduce autonomous vehicles. Hamburg will be the first city with this service, but the long-term goal is to see it spread worldwide. 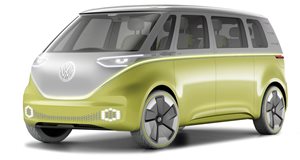