Volvo V90 Is Getting A Very Subtle Facelift

Can you spot the differences?

After giving the XC90 an update for the 2020 model year, Volvo is preparing to update the rest of the 90 series family starting with the V90, which has been caught undergoing testing by our spy photographers. And like all Volvo facelifts, the changes are so minor, you'd be hard-pressed to spot the difference. The V90 has been on sale for three years now, so the time seems about right for a mid-cycle update.

At the front, the bumper has been covered with tape hiding the air intakes and fog lamps, suggesting it will have a slightly different shape and design and possibly new fog lamps. At the back, a small section of the taillights that extend into the trunk has also been covered up, so they will likely have updated graphics. Elsewhere, the lower parts of the bumper are covered up.

Bigger changes are likely to be found under the hood. For the 2020 XC90, Volvo added an Formula 1-style kinetic energy recovery braking system that sold under its new 'B' badge that offers up to 15 percent fuel and emissions reductions in real-world driving.

Volvo has already confirmed this system will be offered for all 60 and 90 series cars, so the V90 and S90 will get the same technical updates. Initially, the energy recovery system will only be available on electrified twin-engine T8 models, which incorporate a 2.0-liter twin-charged four-cylinder engine with a hybrid system producing a combined 400 hp and 472 lb-ft of torque.

Inside, the facelifted V90 should also get an updated infotainment system with Android Auto and driver assists such as Oncoming Lane Mitigation, City Safety with Autobrake, and Cross Traffic Alert systems. Expect the V90 and S90 facelifts to debut sometime in 2020. 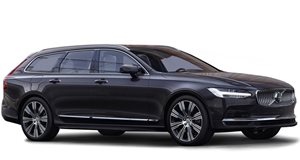