Volkswagen has announced a load of changes for the 2023 model year. VW was also quick to point out that all of its models have been "introduced, redesigned or refreshed in the previous two model years." According to the Wolfsburg, Germany-based brand, that means the lineup should be nice and fresh across the board.

VW makes changes to the GTI, Jetta GLI, and Golf R as well. There'll be a new 40th Anniversary Edition GTI, and we'll have details on that soon. Base GTI S models all get LED headlights, LED foglights, and "minor cosmetic changes." The R is much the same story, getting a new 20th Anniversary Edition (again, details to come), and some more of those "minor cosmetic changes" that VW has not yet elaborated on. The GLI is now also offered in a single, loaded Autobahn trim, unlike the GTI's S, SE, and Autobahn trim levels. As a brief aside, the base Jetta now gets remote start with no futher major updates.

VW's electric ID. 4 will be getting changes, but all VW had to say for now was that "more details regarding the locally-produced MY23 ID.4 EV will be announced soon." The Taos and Tiguan have new updates for 2023 as well. The Tiguan has by far the most minor updates thus far. A new set of 19-inch black wheels for the SR R-Line Black model.

The Taos on the other hand, gets forward collision warning and autonomous emergency braking, blind spot monitors, and rear traffic alert as standard. The S 4Motion trim gets new 18-inch wheels, ID. DRIVE is now standard on SE models, and SEL models can now get the panoramic sunroof standard.

These might not read like a ton of incredibly important changes, but the number of now-standard features here is staggering. Hopefully, that translates to overall nicer cars for VW's American buyers. 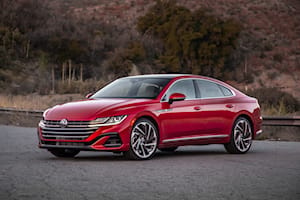