But the Taos won't be so lucky.

Volkswagen has confirmed to CarBuzz that it is working on performance crossovers for the American market, earmarking the VW Tiguan and Atlas as prime candidates.

Crossovers are hot property at the moment, becoming viable alternatives to a hot hatch for many buyers. Just look at Hyundai bringing in the Kona N as a replacement for the soon-to-be-discontinued Veloster N. Speaking to Hein Schafer, senior vice president of product & strategy at Volkswagen Group of America, he confirmed that VW is looking at multiple performance crossovers for the US market.

When asked whether there was a demand for the Tiguan R to be brought stateside, Schafer told CarBuzz that the VW Group of America "definitely tried to get Tiguan R here when Europe launched the car" but ultimately failed for various reasons. One of these was the difference in body structure, as the US only gets the longer version of the Tiguan.

However, he did have good news regarding the US-spec Tiguan. "I can confirm Tiguan will have a successor," he told us. "Whether it will be a full-blown R, maybe not - but I can tell you that there will be a derivative in the Tiguan lineup that will have a little bit more oomph and a little more giddyup."

Schafer was unable to confirm just how much power the performance derivative might have. "Whether that will be like an R that's 100-150 horsepower more than the standard derivative remains to be seen, but we are working on something with a bit more oomph in the Tiguan."

This is a philosophy we've seen applied in the US already, as VW brought an updated 2.0-liter turbo powertrain to the Arteon lineup for 2022 that produces 300 hp and 295 lb-ft of torque - not far off the 316 hp and 310 lb-ft produced by the full-blown Arteon R.

As for when this derivative may arrive, the Tiguan facelift has only just launched in the US, which suggests the next-gen Tiguan is still at least two years away.

The VW Atlas will also be on the receiving end of a sportier version. "Atlas will also have a successor in the market, and the powertrain topic for that particular car is still open too," Schafer tells us. "So we are pushing, maybe, to have some sort of an engine derivative and Atlas that will also put out a little bit more than what we're putting out today."

This won't be a full Atlas R, however. "Whether that will be a full performance version, I'd probably say no," says Schafer, "but it'll be something that'll give the car a little more horsepower and will stand out over the standard V6 or four-cylinder offerings that we have in the midsize SUV market today."

With the Atlas facelifted for the 2021 model year, the soonest we can expect this performance version to arrive would be 2024 as part of a new generation, unless VW somehow manages to give us a powertrain update as part of an annual shakeup.

One SUV that is "highly unlikely" to get the performance treatment is the recently-introduced Taos, with Schafer highlighting that the purpose of the Taos is to "hit a price point, to give you good functionality, tech, and great fuel consumption, yet still with a peppy powertrain." He highlights the technologically advanced 1.5-liter turbo four-cylinder engine from the Taos, specifically for its impressive gas mileage (28/36/31 mpg city/highway/combined), which is also why this unit is now used in the Jetta lineup.

Interestingly, VW doesn't foresee performance SUVs cannibalizing sales from the Golf GTI and R. "I'm not saying that you won't have somebody going from Golf to Tiguan, but I think if you look historically at the Golf R and the GTI enthusiast, that buyer profile would very often surprise you," he says. "Very often, these Golf R owners do, in fact, have an Atlas or a Tiguan in the garage [already]." Instead, he feels the brand is poised to steal sales from other brands, "hopefully attracting a couple of customers that are looking at Ford ST products." 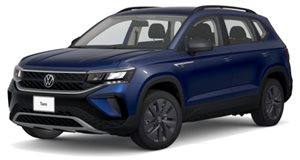 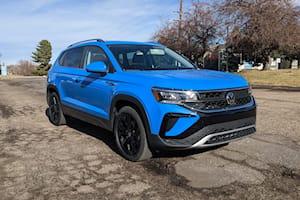