As the coronavirus continues to disrupt the world, Volkswagen still managed to hold its Annual Media Conference a few days ago, though it was mainly conducted online. A significant amount of information was provided, such as financial statements from last year, but also a few details regarding future models. One of those models is the next-generation Volkswagen Amarok pickup truck.

It's important to remember something else vital regarding this vehicle: it will share a good chunk of its components with the Ford Ranger. This is one result of the 2019 agreement struck by VW and Ford to collaborate on future trucks and commercial vans.

One thing in particular VW was interested in was access to the Ranger's platform and Ford had no objections. During VW's presentation, it revealed a single teaser image of the next Amarok and it looks pretty darn good. Chances are it won't be sold in the US but never say never just yet.

Also, American truck buyers are very loyal to the Detroit brands, as well as Toyota. It'd be a significant challenge for VW to make a dent here. Expect the new VW Amarok to arrive in Europe for 2022. Based on the sketch, we can see a far more aggressive design than the current truck though don't expect those big and beefy tires and ultra-high ride height to make production.

The general body design, however, is probably about 90 percent there. Like the Volkswagen Atlas, the next Amarok has squared-off wheel arches and the brand's latest styling language. The two chrome strips running across the front grille lead to an X-shaped front end design. Overall, we like what we're seeing and it'll be very interesting to see the finished product (and concept) as it'll reveal another automaker's take on the Ranger's architecture. What'll be under the hood remains anyone's guess. VW certainly has its share of engines to choose from, so it's unlikely it'll utilize the Ranger's 2.3-liter EcoBoost.

Aside from the Ranger-Amarok combo, a new Ford Transit Connect based on the new 2020 VW Caddy is expected as well as a new Ford city van developed by VW.

Industry News
Mercedes Ready To Take Down BMW In 2021 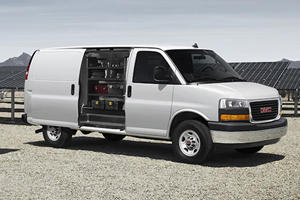