Watch David Beckham Do Donuts In A Maserati

Thanks to the recent debut of the MC20 supercar, Maserati is finally starting to get its mojo back, but one low-volume supercar isn't going to turn the company around. To increase global sales, the Italian automaker is preparing to launch a new crossover called the Grecale that will be sold alongside the Levante.

However, Maserati is still a niche automaker, and the company urgently needs to sell more cars if it's going to survive. In a bold marketing move to give the brand more global exposure, Maserati has appointed none other than former soccer star and global style icon David Beckham as its new brand ambassador. Having owned a rare Aston Martin V8 Volante, McLaren 720S, and Porsche 911 Turbo Cabriolet, Beckham has already shown he has excellent taste in cars.

According to Maserati, David Beckham will be "driving the brand forward to the forefront of luxury motoring in the 21st century" as Maserati prepares to enter a new electric era. "The brand is moving forward. Maserati is driven to challenge the status quo being innovative by nature, powered by passion, and unique by design. The partnership with David is the embodiment of all these values," said Maserati's Chief Marketing, Officer Paolo Tubito.

David Beckham added: "It's an exciting time for me to begin this partnership with Maserati; an iconic Italian brand which shares my appreciation for the very best innovation and design. I'm looking forward to working closely with the brand at such a pivotal time in their history and continuing their growth on a global scale."

Maserati hasn't revealed any specific details about what the partnership will entail, but get used to Beckham appearing in the Italian automaker's promotional videos and launching new models. In the first video showcasing the partnership, we get to see Beckham take time away from his busy schedule to do some donuts in a Maserati Levante Trofeo under a freeway in Miami.

Powered by a 3.8-liter twin-turbo V8 producing 590 hp and 538 lb-ft of torque, the Levante Trofeo plants a huge smile on the former soccer star's face after a quick spin. You might think the stunt was performed by trained stunt driving, but Beckham did his own stunt driving for the video, albeit under the supervision of professional drivers. 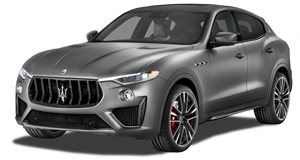