This BMW M5 has been transformed into a 200-mph super sedan.

The BMW M5 has a reputation for being one of the fastest sedans on the market, and the latest F90 model is no exception. Power is provided by a 4.4-liter twin-turbocharged V8 producing up to 617 horsepower and 553 lb-ft of torque, which is sent to an all-wheel drive system that can be switched to rear-wheel drive when you want to kick the tail out.

0-62 mph in the M5 Competition takes 3.1 seconds before maxing out at a limited top speed of 155 mph. Installing the optional M Driver's Package increases the top speed to 189 mph. That's already phenomenally fast for a full-size four-door sedan, but if that's still too slow for you, tuning firm Evolve Automotive is working on a new tuning package that turns the M5 into a 200-mph super sedan.

To test its performance, Evolve recently entered the modified BMW M5 at the UK's VMAX200 event for a series of top speed runs. Even on in the first run using pump fuel with meth injection, the M5 manages to hit 200 mph without breaking a sweat despite problems with the launch control, which is already faster than some supercars. It also manages to leave a Nissan GT-R for dust during a drag race.

Adding racing fuel only increases the top speed. While the speedometer only goes up to 200 mph, official track data revealed the M5 reached 206 mph on pump fuel and 208 mph on race fuel, making it the fastest BMW M5 F90 and the fastest four-door sedan at the event.

It was also the sixth fastest car at the event, beaten by some modified Porsche 911s (one of which reached a staggering 237 mph), an Audi R8, a Lamborghini Huracan, and an Aston Martin Vantage.

What's also impressive is that the BMW M5 managed to break the 200 mph barrier with a stock engine and turbos. To extract more performance from the super sedan, Evolve tuned the ECU, added a Supersprint catless exhaust, an Eventuri intake system, and a meth injection kit to improve cooling. Evolve hasn't revealed how much horsepower the modified M5 produces, but we wouldn't be surprised if it now has over 700 hp. 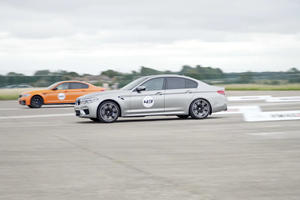 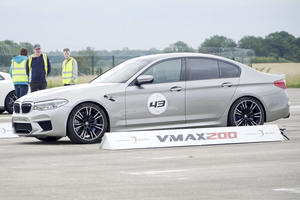 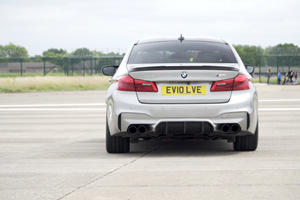 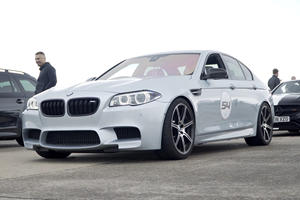 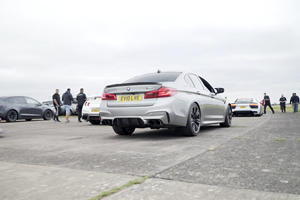