Watch The Ferrari Purosangue And Listen To The V12 Sing

While we're still waiting for the hardcore 812 Versione Speciale to break cover, work on the Ferrari Purosangue, the Italian automaker's first foray into the world of SUVs, continues. During the final days of winter testing, our spies caught Ferrari testing a prototype test mule of the Purosangue demonstrating its snow-driving capability.

Once again, the prototype is a test mule disguised as a Maserati Levante with a longer hood and a lower ride height, but the final production model will have a variable ride height if you need more ground clearance. But what if you want to treat the Purosangue like a traditional Ferrari supercar and tear up the track?

A Purosangue prototype was recently filmed being put through its paces at the Fiorano race track, confirming that it will still drive like a Ferrari.

The test driver doesn't hold back during the high-speed testing and brakes hard, causing the rotors to glow. They even perform a cheeky powerslide for the camera, so they were clearly having fun taking the SUV for a spin. Despite its size, the Purosangue looks surprisingly agile thanks to its front-mid-engine layout enabling a lower center of gravity that will make it handle better than traditional SUVs.

We also get to hear its V12 powerplant sing. Allegedly, the Purosangue's V12 will produce around 800 horsepower, which will make it more powerful than its chief rivals, the Lamborghini Urus and Aston Martin DBX. A V8 hybrid variant is also expected to join the lineup with tech inherited from the SF90 supercar.

When it goes on sale, the Purosangue will fill the void left by the GTC4Lusso being discontinued. Expectations will be high, an SUV with a Ferrari badge will need to be set a new benchmark for performance SUVs. Ferrari's first SUV isn't expected to arrive until 2024, so Ferrari still has plenty of time to make sure it lives up to these lofty expectations. 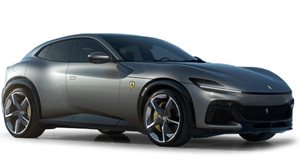