And no, we're not referring to the Green Hell.

Last year's debut season of The Grand Tour may have been a mixed bag, but we have very little to complain about the current season. Jeremy Clarkson's love letter to the Lancia 037's was one of the finest films in the show to date, while the cheap Jaguar challenge was another clear highlight. As for the most recent episode, you could be forgiven for thinking you were watching a classic Top Gear episode. We got to see the Ford GT get the track treatment, but the main film showcased a pair of British sports car classics reborn as continuation models.

Clarkson drove a 1960s Aston Martin DB4 GT Lightweight, while Hammond drove a 1950s Jaguar XKSS. As they struggled with the old-fashioned mechanics causing them to constantly crunch the gears, May was on hand in a contemporary Honda Civic Type R to point out why modern cars are superior. In normal road driving conditions he's right, but on a race track we know which we'd rather drive.

The film had all the hallmarks of a classic road trip, with exotic scenery, bickering, and even a few unscripted moments like an encounter with a cow attacking the Aston Martin, and a couple getting caught in the act during a moment of passion in a car, much to the amusement of Clarkson and the film crew. However, if you thought watching old Jaguars skiing down a slope at high speed looked terrifying, you need to see the finale of this episode. After road tripping around Europe, the trio end up at the Autodromo de Sitges-Terramar, an abandoned banked race track near Barcelona. As Clarkson describes it, it's "a bumpy, pot-holed death trap," and it's hard to disagree.

Originally built in 1922 for oval and motorcycle racing, the circuit was closed after the first race "due to some unpaid bills". For the last 50 years it's been a chicken farm until The Grand Tour trio decided to stage their own race to see who could record the highest speed. In other words, it would determine who the bravest presenter was, since the corners bank up to 78 degrees. With the recent memory of rolling a Rimac supercar down a hill, Hammond wisely opted out of the dangerous challenge, and we don't blame him. Watching both Clarkson and May driving as close to the top of the banked corner on the bumpy circuit as they dared looked genuinely unnerving, but it made for some thrilling motoring TV. 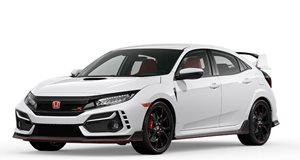