This makes the Rimac C_Two the fastest accelerating road car in the world in a quarter-mile.

It's been more than three years since the Rimac C_Two debuted as a concept at Geneva. It arrived as a direct competitor to the Tesla Roadster. But while the Roadster keeps getting delayed, the C_Two is getting closer to production - and it's even faster than anyone expected. Powering the Rimac C_Two are four electric motors generating a combined 1,914 horsepower and 1,696 lb-ft of instant torque. Rimac claims this setup enables the C_Two to rocket from 0-60 mph in 1.85 seconds, top out at 258 mph and do the quarter-mile run in 9.1 seconds - but it turns out these estimates were very conservative.

To show how much the performance has improved since the concept debuted, Rimac has released a new video showing a pre-production C_Two prototype performing an acceleration test on an unused airfield in Croatia.

This is an official test with the company's founder Mate Rimac behind the wheel. For the acceleration test, the car was fitted with Michelin Pilot Sport road tires while Racebox and Dragy were used to accurately measure the performance and support Rimac's performance claims.

To compare it to the current competition, the C_Two was also pitted against a Porsche Taycan Turbo S, and it makes Porsche's electric supercar look laughably slow by comparison. Amazingly, there's still room for improvement. The current pre-prototype has around 85-90 percent of the final production car's performance, so we still haven't seen its full potential unleashed. Launch control also hasn't been added to the prototype either, and the performance was restricted by the road's rough surface, so imagine what it can do on a smooth drag strip with drag racing tires.

According to the company's founder Mate Rimac, the C_Two is "really, really close" to starting production, with media test drives scheduled to start in the next few weeks. The first customer cars will begin rolling off the assembly line in the next couple of months, but they won't be called the C_Two. Rimac teased that we'll find out the final production model's name "soon" before it enters production. 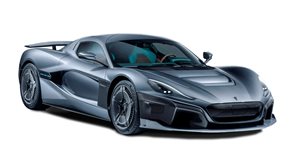