Behind-the-scenes footage shows the BMW M5 tear through Rome with no doors.

Tom Cruise has a reputation for doing his own dangerous stunts and putting his life at risk for our entertainment. In the Mission Impossible franchise, we've seen him ride a motorcycle through oncoming traffic in Paris, hang off a plane, and scale the world's tallest building. Stunt drivers replace the actors in most Hollywood car chases but Tom Cruise does his own stunt driving.

In 2018's 'Mission Impossible: Fallout,' Cruise got behind the wheel of a classic BMW 5 Series in one of the most visceral car chases since 1998's 'Ronin'. BMW's longstanding partnership with the action movie franchise will continue, as the new BMW M5 will be the star car in Mission Impossible 7.

Filming for the latest installment has resumed in Rome, which will be the location of a car chase scene in the film. Behind-the-scenes footage shared online shows Tom Cruise tearing through the streets of Rome in a black BMW M5 with an army of Italian police cars and bikes in pursuit.

Joining Tom Cruise for the ride was actress Hayley Atwell in the passenger seat. Once again, Tom Cruise shows he's very capable behind the wheel, performing tail slides and handbrake turns on the cobbled streets in the rear-wheel-drive sports sedan. Unfortunately, it doesn't look like the sports sedan will survive the scene in one piece as the M5 has no doors. To keep up with the 600-hp sports-sedan, Nissan GT-R and Porsche Cayenne camera cars were deployed to capture the action.

Another video shows Tom Cruise behind the wheel of a classic yellow Fiat 500 weaving through heavy traffic with the police still in pursuit, suggesting he switches vehicles during the chase. To celebrate its partnership with the franchise, BMW launched a special 'Mission Impossible Edition' of the 5 Series and M5 back in 2018, so we wouldn't be surprised if the automaker launches more special editions to coincide with the next film.

Next year's film release schedule is starting to get increasingly crowded as Blockbuster films like James Bond's 'No Time to Die' and 'Fast & Furious 9' were recently moved to 2021, so we're hoping Mission Impossible 7 doesn't suffer another delay. Mission Impossible 8 is also being filmed consecutively and is scheduled to release in theaters on November 4, 2022. 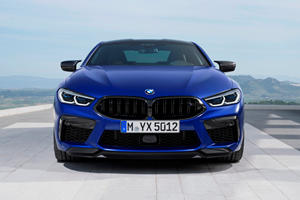