Kia's first dedicated EV will be inspired by the Imagine and the Futuron Concepts.

Kia literally started 2021 with a bang; arranging a spectacular firework display to present the brand's stylish new logo. It marks a new era for the Korean automaker bringing bolder designs and a new family of EVs to take on Tesla.

While models such as the Niro EV and Soul EV are based on existing combustion cars, these will be Kia's first bespoke EVs that will ride on a dedicated platform. By 2027, Kia will launch seven new battery-electric cars across multiple segments. Codenamed CV, the first of these models will be revealed this year with a design inspired by the Imagine and Futuron Concepts. Ahead of its debut, a prototype of the Kia CV has been spied undergoing evaluation.

Kia has done a good job disguising the design, covering the prototype in camouflage and body cladding. This makes it difficult to tell if the front and rear fascias will closely resemble the concept's. Like the concept, the prototype takes the form of a coupe-style crossover but it appears to have a sharper design than the curvy concept.

As for technical specifications, Kia has already confirmed the CV will offer 310 miles of range based on Europe's WLTP cycle, but America's EPA range estimate will be lower.

Utilizing the same 800-volt battery system as the Porsche Taycan, the Kia CV will support rapid charge times. When using a 350-kW charger, the battery will charge from 20-80 percent in around 20 minutes. A high-performance version will also reportedly accelerate from 0-62 mph in less than three seconds, but this will inevitably affect the driving range.

Kia's corporate sibling Hyundai is also developing its own family of EVs under the new Ioniq sub-brand, starting with the Ioniq 5. Inspired by the retro Hyundai 45 Concept, the Ioniq 5 will debut next month, while the Kia CV will follow a few months later. 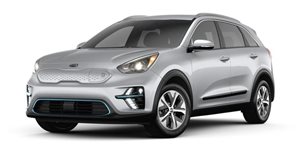 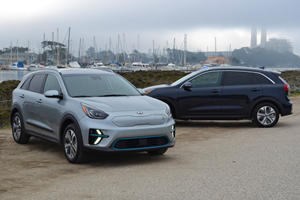