Go to Japan and you'll experience a whole breed of cars not found anywhere else. They're called Kei cars, all of which are small, fairly limited on power (typically below 63 hp), and designed to meet Japanese regulations. Although Japanese automakers could never find sales success with Kei cars in America, Japanese buyers enjoy various tax and insurance benefits, and can easily park their cars in crowded cities.

Over the years, Kei cars have found some fans in the US and, assuming the 25-year ban has expired for vehicles never originally intended for the US (a dumb law and another article entirely), they can be legally imported.

Of course all are right-hand drive but isn't that part of the fun? Oh, for sure, but the general attitude towards Kei cars boils down to this: you either love 'em or you hate 'em. For those that love 'em, this week's Craigslist hidden treasure is a particularly attractive find, a 1991 Mazda Autozam AZ1. Even the name sounds funky. But unlike a lot of other Kei cars, the AZ-1 is actually a sports car. In fact, it's mid-engined. Before we delve in deeper, we need to point out that the Autozam brand, though now defunct, was part of Mazda and existed for only nine years.

There isn't a single Mazda badge on the car which only adds to its mystery for those who have absolutely no clue what it is they're looking at. Chances are they don't even know Kei cars exist. Anyway, the Autozam AZ-1 went on sale in 1992 and only two exterior colors were offered: blue and red, though both had gray lower panels. Its engine was a Suzuki-built turbocharged three-cylinder with 63 hp and 63 lb-ft of torque. Power was sent to the rear wheels through a five-speed manual.

Total weight: around 1,580 pounds. Yes, that's even lighter than first generation Mazda MX-5 Miata, for reference. What's also interesting about the AZ1 is that not only did Suzuki provide the engine, it also did the initial development work before Mazda took over the project.

Because all Kei cars could only have a maximum length of 126 inches, it was a challenge for designers and engineers to not only squeeze in that already tiny engine, but also to give the car some style. And just look it. Those gullwing doors, Ferrari Testarossa inspired side air vents, and sporty stance. It was an instant classic. Unfortunately, the AZ1 suffered from a slightly expensive price tag, snug interior, and bad timing. Japan had just entered a recession and Mazda had a hard time selling the car.

To help combat this, Mazda later launched some unique versions, such as a Mazdaspeed that added a body kit, optional shock absorbers, front and rear strut bars, unique alloy wheels, but no added power. AZ1 production ultimately ended in 1994.

During its lifetime, Suzuki also sold its own version, the badge-engineered Cara. So to find one of these up for sales in the US is pretty special. This one, located in Houston, Texas, has 45,000 original miles and is in beautiful condition. The seller serviced it less than 1,000 miles ago with new accessory belts and an air filter. The A/C sounds like it's not working properly, but this is typically an easy fix. The paint is also original and aside from a small dent on the rear bumper, everything checks out.

The price is $17,900, which does sound a bit expensive. Then again, whoever buys this will have something quite rare that will immediately attract attention just about everywhere it goes. 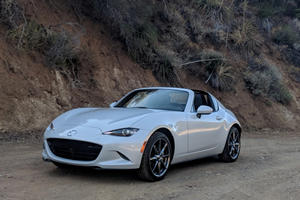