Even more F1 rumors about Vettel's future, Hyundai is considering a full-size premium SUV, and the Pike's Peak Hill Climb will likely be delayed.

We're in the midst of the classic and rare car auction season and this weekend the annual Goodwood Festival of Speed will be taking place. In addition to the annual hill climb and other racing events, there will be an auto auction with many rare gems up for grabs. We'll hopefully have more details regarding the auction and the event itself in the coming days. In the meantime, here are some auto industry news highlights from the past week. Have a great weekend everyone.

Seeking a U.S. Production Partner: Volvo has been doing quite well these days even after Ford sold the brand to Chinese automaker Geely. However, the potential for them to do even better is still very much there and the automaker sees the U.S. as a main conduit for that to happen. Volvo CEO Stefan Jacoby told BusinessWeek that building their own production plant in the U.S. is unlikely, so the alternative is to find an American partner to help "utilize a North American plant." Talks are underway now with some potential partners and Fiat has been specifically mentioned as one.

2013 MY Jeep Grand Cherokee to Be Short: The latest Jeep Grand Cherokee has been a huge success and the automaker is about to make it even better. According to Automotive News, not only has Jeep confirmed that it'll be receiving a diesel option (a 3.0-liter turbo V6), but a facelift is also expected for 2014. That means that model year 2013 will be cut short in order to make way for the updated model. Also set to be offered in the 2014 Grand Cherokee will be a ZF eight-speed automatic. And yes, both the diesel and eight-speed 'box will be available in the U.S.

Vettel Moving to Ferrari in 2014? There are always rumors in F1 but this one grabbed our attention. Recently, Ferrari head Stefano Domenicali stated that he believed Red Bull driver Sebastian Vettel and current Ferrari driver Fernando Alonso would work well together. If this were to happen, don't expect Vettel to jump ship until 2016 at the earliest. Ironically, there's also been talk of Vettel's current teammate, Mark Webber, finding a new home at Ferrari as well - but in 2014 as a replacement for Felipe Massa. Thing is, Webber would only be on board at Ferrari for one season if the Vettel rumor is true, or both for that matter.

Hyundai Wants a New Full-Size SUV: Now this one is strange. According to a report from Ward's Auto, Hyundai is looking at producing a full-size SUV even though their seven-passenger front-wheel-drive Veracruz crossover is about to be discontinued. Hyundai CEO John Krafcik has hinted at a new premium crossover, but if that were the case, why didn't the automaker simply consider adding more features to the Veracruz and jack up the price while pushing current owners to switch to the upcoming LWB Santa Fe? A possible answer is that Hyundai wants something new but with rear-wheel-drive.

This Year's Pikes Peak Hill Climb Likely to be Delayed: The wildfires sweeping through the U.S. state of Colorado are absolutely horrific as they cause the destruction of property and, most importantly, life. The conditions out West are unfortunately perfect for wildfires to keep spreading their wrath. Because of that, this year's Pikes Peak Hill Climb will most likely be postponed. Originally scheduled for Sunday, July 8th, the Waldo Canyon wildfire currently blazing near Colorado Springs is the specific culprit. It has already destroyed more than 2,000 acres in the area and firefighters are still unable to contain it. 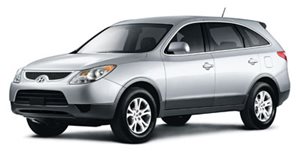