There was a time when there was no such thing as a Buick crossover. Today, crossovers consist of the entire lineup. Buick first dabbled in the crossover segment back in 2002 with the Rendezvous, a corporate cousin to the Pontiac Aztec, the crossover of choice for everyone's favorite fictional high school chemistry teacher. The Rendezvous stuck around until 2007 and was succeeded by the first-generation Enclave in 2008. And it was also that year when the fifth-generation Buick Regal went on sale.

Unlike past Regals, however, this one appealed to sport sedan buyers for one simple reason: it was a rebadged Opel Insignia, a German-designed and engineered vehicle. This new Regal/Insignia didn't look anything like past Regals, or any relatively recent Buick sedan for that matter. It was a whole new ballgame and a potential sign of the brand's return to performance. But it was in late 2011 when the real treat arrived, the Buick Regal GS.

Based on the 2010 concept shown at that year's Detroit Auto Show, the Regal GS came powered by the EcoTec 2.0-liter turbo four-cylinder with 270 horsepower and 295 lb-ft of torque. This engine produced 135 hp per liter, making it Buick's highest specific output to date. The Regal GS's overall exterior styling upgrades, specifically the larger air vents on the lower front fascia and unique wheel designs, carried over from the concept, but there was one exception. The production-spec GS was front-wheel-drive only, whereas the concept had an AWD system. Buyers were easily able to look past this for one key reason: a six-speed manual gearbox. If they didn't want to row their own gears, a six-speed automatic was optional.

Other GS-only features included high-performance brakes with Brembo front calipers and an upgraded front suspension. A set of 19-inch wheels came standard and 20-inch forged aluminum wheels were available. Performance was also quite respectable with a 0 to 60 mph time of less than 7 seconds.

To its credit, Buick paid attention to GS buyer feedback and for the Regal lineup's 2014 model year update, the GS received an AWD option, though it could only be had with the slushbox. Unfortunately, Buick also dropped the GS's output so that it equaled that of the less expensive CXL Turbo, rated at around 220 hp and 258 lb-ft. More good news came in 2018 when the now-discontinued sixth-generation Regal debuted, once again an Opel Insignia underneath. The GS model also returned, this time powered by a 3.6-liter V6 with 310 hp. Unfortunately, no manual was offered.

For those who want a performance sedan with German origins and that coveted manual for a reasonable price, look no further than this 2012 Buick Regal GS up for sale at EZ Auto in Houston, Texas. It's had two previous owners but there are only 54,853 miles on its odometer, according to the CarFax report. There's no history of accidents or any damage. The asking price is $12,995, which is actually quite reasonable considering its overall solid condition and low mileage. Best of all, it's a fun-to-drive performance value that has potential future classic status. 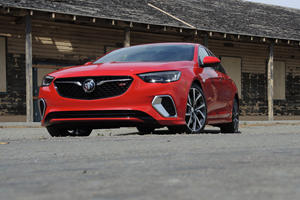 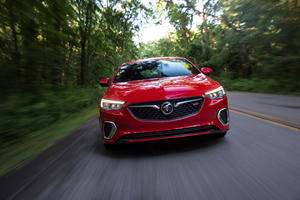