What Has 220K Miles Done To This Lexus V8 Engine?

This 450-hp IS F has not been driven with love.

Lexus is renowned for building world-class luxury vehicles such as the LS 500, and its cars are also renowned for lasting millions of miles. The luxury division of Toyota has also been investing lots of time and money into building hardcore performance models: who can forget the legendary LFA and V8-powered IS F? The 2021 Lexus IS range recently made its debut with improved tech and driving dynamics and promises to take the fight directly to BMW's 3 Series, and while we wait for the hardcore IS F to arrive, the following video shows just how reliable the first-generation car was. With over 220k miles on the odometer, what will this car's internals look like?

Lexus revealed the IS F in 2007 as a direct competitor to the dominant BMW M3. Under the hood, the IS F boasts a naturally-aspirated 5.0-liter V8 engine developing 416 horsepower and 371 lb-ft of torque. The car in the video has seen some mild upgrades and claims a power figure of over 450 hp. The odometer shows 220,000 miles, and that includes track days and general hooning. The video covers a number of issues with the car, including the replacement of maintenance parts such as wheel bearings and rear control arms, but the interesting part comes when a leaking valve cover leads to the exposing of the DOHC heads.

Those who expect a mangled mess of valve springs and worn-down camshafts will be sorely disappointed. The heads of this IS F are in pristine condition and show zero signs of wear. This of course doesn't mean that the rest of the engine is healthy, but it illustrates just how important regular maintenance is, especially on high-revving performance motors. Once the maintenance is completed, this 2008 IS F fires up and rolls out the shop with another 200k miles of hard driving in its sights. 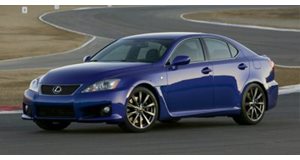