What Is Ferrari Hiding With This Mysterious New Prototype?

We think we have the answer!

Ferrari has been spied testing something mysterious. In a series of snaps shared on the forum ForoCoches, a new creation from Maranello was spotted almost entirely concealed by extremely heavy camouflage. Other than the wheels, wing mirrors, windows, and cutouts for the exhaust outlets, Ferrari has left much of the design to the imagination. It looks to have a particularly short wheelbase and a mid-engined layout. Information from the forum indicates that this is a new model that will be part of Ferrari's Icona series, which is touted to be a special, limited-run model series that already includes two members, the Monza SP1 and Monza SP2

As a quick recap, 'Icona' is Italian for 'icon', so it's safe to say that this test mule previews something special if it's to act as a sequel to those remarkable speedster models. The new car pictured here is said to be known by the internal codename of F251 and is to be a tribute to the beautiful 1967 330 P4. There are no visible hybrid stickers in the spy photos, so it's little surprise that the engine is expected to be the same V12 from the 812 Competizione, a truly phenomenal power plant. But while that 12-cylinder supercar is front-engined, this new vehicle will also be based on the LaFerrari Aperta's monocoque, making it a mid-engined beast. The 330 P4 racing car appeared in the film Ford V. Ferrari and its curvaceous lines certainly look as though they could have inspired the F251 spied here, although the newer car trades some of those curves for sharper edges.

In a tweet by @ElBARdeJenson_, it's suggested that Ferrari used the body of the LaFerrari to further conceal the F251's lines. Like the 330 P4, the F251 has rearview mirrors positioned on the front fenders, and the rear end is also taller than the front. With Ferrari's first EV expected in 2025, the F251's use of the 812 Competizione's 6.5-liter V12 takes on even greater significance. In the latter car, this engine churns out an incredible 819 horsepower and 510 lb-ft of torque. In what looks to be a smaller, lighter Ferrari, that should make the F251 a real tire-shredder.

We'll have to wait and see what the final product looks like, but given the amount of camo used here, we don't expect to see a full reveal until late next year. 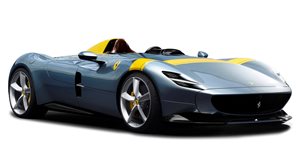