Every brand has something that makes it special, but Aston Martin has many things.

Aston Martin has gone through its fair share of trials and tribulations. The company has gone through bankruptcy and ownership changes, even being owned by Ford at one point. Even though Aston Martin hasn't had the most stable financial history, it is still one of the most legendary marques in history. Aston Martin's slogan is "Power, Beauty, and Soul." Unlike other manufacturers, (like BMW), Aston Martin's slogan doesn't seem to have been tainted over time. In fact, it has never been more true.

Let's start with that first word, "power." Since the modern era of Aston Martin (around 2005), the company has been using either V8 or V12 engines in all of its models. In the latest Vantage the 4.7-liter V8 produced 430 horsepower. This may not seem like much, considering that a Jaguar F-Type has over 100 horsepower more than that, but Aston Martins have never been about overwhelming power. Rather, Aston Martin gives you an adequate level of power for ideal enjoyment. If all you are looking for is power figures, go get a Nissan GT-R. Aston Martin's signature engine was its V12, which has been in stuffed in most of its models since 2005. This engine is mostly the same, although power has been steadily increased.

At its peak, the 6.0-liter V12 produced 568 horsepower in the Vanquish. That's not bad considering that this engine started off producing only 450 horsepower in the 2005 DB9. What's even more impressive is that this sweet-sounding, naturally aspirated V12 was no more than two Ford V6s mounted together. Its amazing to think that Aston Martin has milked this powertrain for more than a decade. Luckily, Aston Martin is finally moving with the times. The new DB11 has a 5.2-liter V12, which makes a healthy 600 hp and 516 lb-ft of torque. This is far more than another other "conventional" Aston Martin models. It seems like the company is finally ready to deliver on that promise of power.

The Ford engine has served Aston Martin well, but now the company is moving to a much better source for its V8 engines. Aston Martin will be working with AMG, which we all know can build some badass cars. The new Vantage will probably get the AMG 4.0-liter biturbo V8 which has all of the advantages of a turbocharged engine, without sacrificing sound. That may not seem so important, but if we skip ahead to the third piece of Aston Martin's slogan, "soul," we know that the company has made the right partnership. Soul is not easy to define in a car, but we know that Aston Martin cars have always had one. Some cars may be more powerful or faster, but Aston Martin cars always had a soul.

The way that we have thought about it is that Aston Martin was always more focused on giving a pleasant driving experience than getting around a track faster. Yes, a Nissan GT-R is less expensive than a Vantage, but the GT-R doesn't sound like THIS.

Luckily, Aston Martin made the right call with AMG, a company which still builds its engines by hand. So we should still get that spine-tingling sound, but this time with some performance that won't have GT-R fanboys laughing. We have already seen other advantages to the AMG partnership with the new DB11. Aston Martin has always had beautifully appointed interiors, but the DB11 finally has a beautiful interior that is also usable. Aston Martin also used to have one of the worst infotainment systems in the business. Thanks to Mercedes, you can now drive an Aston Martin without feeling like you are stuck in 2005. As for the final term, "beauty," well, what more do we have to say?

Everyone's taste may be different, but can anyone really deny that Aston Martin builds some of the most attractive cars on the planet? There is a reason why James Bond's car is often an Aston Martin. Like the fictional spy, Aston Martin cars represent a level of sly sophistication that "normal folks" can only dream of. So let's take one more look at that Aston Martin slogan. Power. Aston Martin is adding new turbocharged engines to its lineup which add enormous horsepower gains without sacrificing noise. Check. Beauty. Has there ever been any doubt? Check. Soul. Aston Martin has finally added some functionality to its cars, but judging by the DB11's interior, this will never interfere with the company's soul. Check. 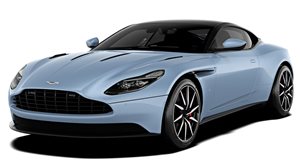