Will The Reborn Dodge Dakota Be A Chinese Truck?

The Dakota will likely be back, but in what form?

The Dodge/Ram Dakota had a 25-year run up until it was discontinued, and then CEO of Chrysler Group, Sergio Marchionne, said it probaly wouldn't be replaced by a similar vehicle due to declining popularity of compact trucks in the US.

However, the mid-sized truck segment is enjoying a resurgence with the recently released Ford Ranger, the evergreen Nissan Frontier, the stalwart Toyota Tacoma, and The General's Chevrolet Colorado and GMC Canyon. FCA has a player in the game in the form of the Jeep Gladiator, too, but its adventurous appeal doesn't quite replace the workhorse shaped void left by the discontinued Dodge Dakota. To that end, the automaker has promised that a mid-size Ram truck is coming, and the Dakota name is expected to return with it after an eight year hiatus.

During a May 2019 earnings conference call, FCA CEO Mike Manley claimed that "being able to find a cost-effective platform in a region where we can build it with low cost and it still being applicable in the market is what they're struggling with at the moment," when it comes to a mid-size Ram pickup.

As part of its latest five-year plan, Ram revealed that a mid-sized model is expected to arrive by 2022. There was speculation that something based off the Jeep Gladiator would ultimately come to market. However, FCA's merger with Peugeot's holding company PSA could change things. AllPar.com has noted, through one of its members, that Peugeot has a midsize pickup truck available in Africa.

The Peugeot truck is built by the automaker Dongfeng, but the source believes Peugeot is working on a truck for the global market with another Chinese automaker called Changan. If that's the case, AllPar is suggesting that the Ram Dakota, if it gets called that, could be a Chinese built midsize truck, by way of PSA.

The chance of things playing out that way is likely very slim. Firstly, PSA and Changan have agreed to dissolve their joint venture, as of last month. Next, the idea of a proud American truck brand rebadging Chinese trucks for the American market doesn't sit right. With companies like Nissan and Toyota carefully making sure its American market (full-sized) trucks are designed and built in America, it seems like it would be a terrible move for Ram to move away from that. 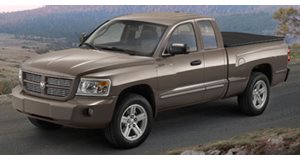