Witness The Birth Of The BMW X5

The original designer takes us through the steps

The BMW X5 has been one of the most important models for Munich-based automaker BMW in the last two decades. The reason is quite obvious: it was BMW's first foray into the world of luxury SUVs, a market that had been tapped by its rivals for years. The X5 was launched in 1999 and has since gone on to sell over two-million cars.

A recently posted video by the actual designer of the original X5, Frank Stephenson, takes us through the process of designing this iconic car step by step. Stephenson is also the designer of the modern Mini Cooper.

The first generation E53 shared a number of its parts with the Land Rover family of cars, such as the Range Rover HSE's off-road engine management system, but the brief given to Stepheson and the rest of his team was to create something uniquely BMW. Stephenson says when they got the go-ahead to start work on the new design, they were given a timeframe of only six months.

"I had a few hours on a flight to come up with the initial design," Stephenson said. Since there was nothing to base this car off of, the design team had to start from ground zero. What they did was to start with a Hofmeister kink in the D-pillar to give it its first hint of being a BMW. After that, they added the iconic kidney grilles and indented hood, and the rest flowed from there.

"I think the reason the original X5 is still loved is that it signified a stepping stone of BMW's commitment to building SUVs which now include smaller SUVs such as the X1. All we did was use classic BMW styling elements and bring it together in elegant SUV design. The current X5 suits that ethos perfectly" he concluded.

BMW's latest string of designs, including the wild grille on the upcoming 4 Series might seem too far out for some conservative fans, or those with good eyesight, but as Stephenson explains, all the classic BMW styling elements are present. They've just been toyed with to come up with something refreshing yet still recognizable. We'll let you decide. 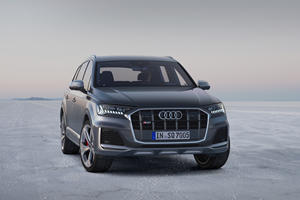