You Can Now Buy A Rolls-Royce With Bitcoins

It's just a pity the value of Bitcoin continues to plummet.

Last year, the rise in value of Bitcoin led to someone selling a McLaren 720S for 25 Bitcoins. Back then, one Bitcoin was worth over $14,600. Earlier this year, a California dealership also capitalized on its popularity and accepted Bitcoin as a form of payment for Bugatti Chiron and Pagani Huayra hypercars. Current market value for Bitcoin has plummeted to less than half that, which is worse than the depreciation on most new cars.

If you have a virtual pile of Bitcoin and are looking to upgrade to a new luxury car or add to your collection, you can now use the digital currency to buy a brand-new Rolls-Royce.

"The rise of Bitcoin sparked my interest," said Tilman Fertitta, owner of Post Oak Motors. "Being a premier luxury car dealer, I always want to offer my customers the very best buying experience and this partnership will allow anyone around the world to purchase our vehicles faster and easier."

"We've noticed people prefer to make larger purchases with bitcoin since it is a simple way to make payments," said Sonny Singh, Chief Commercial Officer of BitPay. "This partnership is timely with the increasing popularity of ultra-luxury vehicles. Post Oak Motors has a great reputation of selling the finest cars and we are thrilled to be partnering with Tilman."

Currently, Bitcoin sits at $6,425 a coin meaning you'll need around 55 Bitcoins to buy a $350,000 Rolls-Royce at current exchange rates. Since it peaked in December, Bitcoin's value has steadily declined, losing half its almost $20,000 value less than two months later. Incidentally, the value of Bitcoin continues to plummet. Just this week, it dipped from $7,360 to $6,425 so you may want to take the plunge sooner rather than later if you have some spare cryptocurrency to spend. 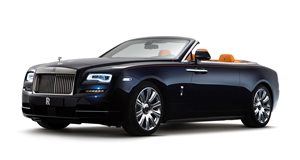