The company is trying to drive further interest in its military vehicles.

If you need to escape the carnage of an apocalyptic event or somehow find yourself in the throes of a military mission, the first choice of vehicle that springs to mind probably won't be a Kia. Something like the Rezvani Hercules 6x6 seems more appropriate. But Kia is no stranger to building military vehicles. A few years ago, the company produced a Humvee-like Kia Light Tactical Vehicle and since 2016, Kia has produced light tactical vehicles for the South Korean army.

Because of that, Kia's latest unveiling of a Light Tactical Cargo Truck and Bare Chassis concept is perhaps not entirely surprising. The pair of concepts were shown at the 2021 International Defense Exhibition & Conference (IDEX) in the UAE. Naturally, these vehicles require a high degree of mobility and durability for their unique uses.

The new Light Tactical Cargo Truck concept features a modular chassis and seats four occupants. It's powered by a Euro 5 diesel engine with 225 horsepower, making it roughly as powerful as a new Kia Sorento Hybrid. Power goes to all four wheels via an eight-speed automatic gearbox. This truck comes with an independent suspension, run-flat tires, and a limited-slip differential, while the long wheelbase can be set up to underpin everything from a mobile workshop to a communications center.

If required, the truck can haul as much as three tons of cargo in its rear compartment and ten fully-armed soldiers. The modular chassis lends itself to both armored and unarmored variants of the truck, which can be used for purposes like target observation, tactical commanding and reconnaissance, and more.

While military vehicles are strictly a case of form following function, Kia's truck concept has an aggressive front design that has been implemented to drive further interest in its military vehicles. The Bare Chassis concept with its exposed ladder frame serves as a visual representation of the scalability of the platform. Kia hinted at a civilian version, saying it is "developing vehicles based on the Bare Chassis for clients' eclectic taste around the world."

We know that Kia hasn't ruled out the idea of a truck, so perhaps the company's work on tough chassis setups for military vehicles could benefit this future pickup.

"Both concepts on display have been developed to be highly flexible and durable," said Ik-tae Kim, Vice President for Kia's Special Vehicle Division. He went on to say that the concepts have "the capability to be used in some of the world's harshest environments." 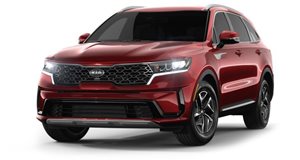 Design
These Porsche-Inspired Nike Sneakers Are Cool As Hell