BMW knows that not everyone wants an EV yet, and for those who aren't yet ready to make a full transition, it's brought to market the perfect blend of electric augmentation and the benchmark in the compact luxury sedan segment. Meet the new 2021 BMW 3 Series Hybrid, or for those who like their alphanumerical names, the BMW 330e and 330e xDrive. Based on the seventh generation G20 3 Series platform, the new plug-in hybrid derivatives aim to blend all the composure, handling dynamics, and luxury of the standard 3 Series range with the performance and environmental benefits of hybridization, following in the footsteps of the original ActiveHybrid 3 and F30 330e hybrid.

With BMW getting the hang of electrification and hybridization, the lessons learned have now been brought into the ever-popular 3 Series infrastructure. Slotting in at the lower end of the 3 Series hierarchy, the 330e twins find themselves with more power than the base 330i, bridging the gap between it and the range-topping BMW M340i. With the world rapidly transitioning to electricity as the prime means of propulsion, could the 3 Series Hybrid be the best interpretation of the icon for the modern era?

Focused Styling Without The Massive Grilles

BMW's most recent designs have drawn the ire of fans for oversized grilles that are seemingly becoming a new signature for the German marque. For the time being, the 3 Series Hybrid is exempt from such traits, boasting a more classic interpretation of the BMW kidney grille, with integrated shutters for improved aerodynamic efficiency.

The rest of the design is typical 3 Series, with LED headlights and taillights, the classic Hofmeister kink on the C-pillar, and a pair of twin circular exhaust pipes low and wide on the rear bumper and finished off in chrome. 18-inch V-spoke alloy wheels are shod in all-season rubber, and the 330e and 330e xDrive is available in one of ten exterior hues, matching the standard 3 Series color palette identically. These include standard options like Alpine White, Jet Black, Sunset Orange, and Melbourne Red.

Like the standard 330i, the 330e can also be equipped with either the standard Sport Line styling package of the optional M Sport package, the latter of which adds sportier front and rear fascias, blacked-out trim elements, and M Sport wheel designs.

In fact, badging aside, the only difference between the 330e and its non-hybrid 330i sibling is the inclusion of a charging port flap on the front left fender, meaning this shot of electrification lets shoppers fly almost completely under the radar.

A Driver-Focused Cockpit With A Digital Edge

BMW interior designs don't evolve rapidly from generation to generation, and getting behind the wheel of the G20 3 Series Hybrid sees a familiar design take shape ahead of the driver. The latest interpretation of BMW's tri-spoke sports steering wheel frames a digital instrument cluster in the form of BMW's Live Cockpit Professional. The system integrates traditional instrumentation with infotainment, displaying navigation and infotainment in a customizable display area, and in the case of the 3 Series Hybrid, it displays hybrid-specific information like electrical range, charge status, and customized dials when using the vehicle in hybrid mode.

It's supplemented by a central infotainment touchscreen with full iDrive 7.0 functionality, while the entire center console is angled towards the driver subtly to aid viewing and make the controls easier to reach.

The system makes use of the traditional rotary control dial in the center console but also responds to vocal commands prompted by the phrase "Hey BMW", after which the Intelligent Personal Assistant will help you control almost all aspects of the car's digital systems.

The rest of the interior is tailored around whether you stick with the standard Sport Line design theme or opt for the M Sport package, with the latter equipping an M Sport steering wheel and a dash upholstered in SensaTec. From there, buyers are able to upholster the seats in either SensaTec leatherette or Vernasca leather, with the latter boasting seven color options ranging from Black and Oyster to combinations of Canberra Beige and Black, or in the case of the M Sport, black leather with blue contrast stitching and M tri-color detailing.

Classic BMW Performance With An XtraBoost

All models with the '330' badge affixed to their trunk lid are equipped with a turbocharged four-cylinder engine in some way, but while regular 330i models develop 255 horsepower and 294 lb-ft of torque, the 330e's combustion engine develops a paltry 181 hp and 258 lb-ft. However, the 330e is augmented by an electric traction motor that BMW calls XtraBoost, which supplements the system with an additional 107 hp and 77 lb-ft and draws power from a 12 kWh lithium-ion battery pack. The resultant combined outputs rest at 288 hp and 310 lb-ft of torque, paired exclusively with an eight-speed automatic gearbox. Additionally, the powertrain allows for an additional overboost to be deployed in Sport mode, boosting peak power by an additional 40 hp for a period of 10 seconds.

In standard 330e guise, it's all sent to the rear wheels, while the 330e xDrive is able to send power to all four corners for added traction. 0-60 mph comes up in 5.6 seconds for the 330e, matching the sprint of the standard 330i, while the xDrive model takes a tenth longer due to the additional weight of the AWD system.

But while performance may be closely matched with the standard 330i models, the 330e possesses benefits in other areas. The electric motor and battery afford the 330e 22 miles of electric range, while the 330e xDrive will manage 20 miles, and both are capable of speeds of up to 87 mph in pure electric mode, with EPA MPGe estimates pegged at 75 and 67 MPGe respectively.

While the standard BMW 3 Series has traditionally found many a rival in the form of the Mercedes-Benz C-Class and Audi A4, and in recent years from the Lexus IS and Alfa Romeo Giulia, the plug-in hybrid has far fewer direct competitors in the segment. In the premium compact sedan game, just one other manufacturer produces a plug-in hybrid, with the Volvo S60 Hybrid outclassing the 330e with more than 400 hp.

However, you pay substantially for the extra power, with the S60 Hybrid starting north of $50k. By contrast, the 330e carries a base MSRP of $44,550 with the 330e xDrive upping the asking price to $46,550 before options. This represents an increase of $3,800 over the comparable 330i derivatives. 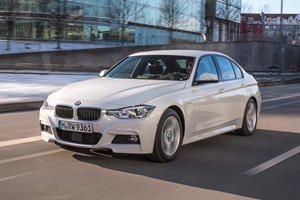