The best BMW fighter Cadillac has ever built.

The arrival of the new 2022 Cadillac CT5-V Blackwing comes at an interesting time. Just days before the reveal, Cadillac's parent company, General Motors, announced that from 2035, it will no longer manufacture or sell combustion-engined vehicles. Between now and then it will continue its transition towards an all-electric vehicle future. The CT5-V Blackwing, however, is the exact opposite of an EV, and the rumbling sound coming from under its hood will be delightful music to the ears and souls of purist gearheads everywhere.

The CT5-V Blackwing is the most powerful Cadillac ever built and will go head-to-head against some of the most powerful super sedans on the planet. Not surprisingly, those rivals come from Germany. Cadillac is certainly no stranger to immensely powerful sedans; the CT5-V Blackwing is the successor to the CTS-V. The two even share an engine, but the new sedan is faster and better-looking. Chances are, it is Cadillac's final (gas-powered) super sedan.

Testing was completed at GM's rolling-wind tunnel. Buyers can opt for a carbon fiber package instead of just the standard aero package with the aforementioned features. This package is worth every penny because it enables a 75 percent lift reduction.

A set of staggered 19-inch forged aluminum wheels (19x10 and 19x11 front and rear) are standard. These multispoke wheels have a laser-etched V-Series logo and can be had in a choice of two colors. The Brembo brake calipers can also be finished in bronze, as well as red, blue, or grey.

The general design of the CT5-V Blackwing's interior apes that of the CT5, but numerous premium touches are new. There are three interior trim levels: Base, Mid-level, and Up-level. All come standard with wireless Apple CarPlay and Android Auto compatibility, and wireless phone charging. There's also a standard 15-speaker AKG audio system, Surround Vision, and a head-up display. There's an abundance of carbon-fiber trim throughout the cabin, such as the manual transmission console, while the shifter has a 3D-printed cap.

A 14.5-inch high-performance steering wheel is optional, as are track-focused front seats. They're designed to provide ideal lateral support when necessary, with up to 18 power adjustable settings and a slim headrest designed to accommodate helmets. Regardless of trim, all drivers will further benefit from a 12-inch HD display with customizable performance settings like a track screen providing key data for lap times and 0-60 mph acceleration. A Performance Data Recorder is optional.

Magic Under The Hood

Engines like this won't be around much longer. The CT5-V Blackwing is powered by an upgraded version of the same hand-built 6.2-liter supercharged LT4 V8 found in the CTS-V, now rated at 668 horsepower and 659 lb-ft of torque. Cadillac estimates a 0-60 mph time of 3.7 seconds when equipped with the optional 10-speed automatic transmission with paddle shifters. A Tremec-sourced six-speed manual is standard, with both sending power to the rear wheels. Cadillac claims this is its most powerful vehicle of all time with a top speed in excess of 200 mph.

Performance-focused systems like an electronic limited-slip differential, Magnetic Ride Control suspension, and MacPherson front and five-link independent rear suspension are standard fare. To guarantee all of this equipment delivers the performance goods, the sedan underwent extreme 24-hour track testing. Engineers used this data to refine vehicle calibrations, especially for the automatic gearbox. Among many things, this resulted in ultra-fast and precise shifts.

Cadillac has confirmed pricing for the 2022 CT5-V Blackwing will begin at $84,990 when deliveries begin next summer. Sales have already begun and the first 250 examples receive unique badging. Dealers will begin accepting orders shortly.

There are only a few players in the ultra-high-performance luxury full-size sedan segment, specifically the BMW M3 and Mercedes-AMG C63. The Audi S4 is less powerful than its two German rivals. But the CT5-V Blackwing is more powerful than the also just-revealed BMW M5 CS and, unlike any of these competitors, comes standard with a stick. This V8-manual combo is becoming increasingly difficult to find in any new vehicle, and Cadillac has more than delivered the goods here. 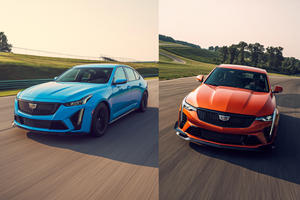