2022 Subaru Outback Wilderness First Drive Review: A Lion In The Dirt, A Lamb On The Street

Subaru's newest and most capable off roader loses a little of its on-road manners.

All Subarus, except maybe the BRZ, have mud in their collective veins. The company's SUVs all feature all-wheel drive and even its sporty sedans are adept at gravel driving. The Outback, the company's wagon-cum-crossover has never been an exception, but now the company has built its most dirt-friendly adventure vehicle yet in the latest special edition, the 2022 Subaru Outback Wilderness.

The Wilderness gets a lifted ride height, a new exterior treatment, upgraded suspension, some new X-Mode features, and some interior upgrades that'll keep the dirt from taking hold. It's the wildest looking Outback ever, but is it different enough to warrant trading in your old one? We took the newcomer on a drive to find out if this supposed crossover has what it takes to tread on Jeep territory.

Subaru gave the Outback a huge makeover in Wilderness trim. It ditched almost all of the chrome in favor of black cladding and anodized copper accents. Those copper accents, Subaru tells us, are supposed to be call-outs, "there's some function there." You can see it on the tow hooks as well as the roof rails on the outside, and several other spots in the cabin. Those roof rails can now support 700 pounds when standing still and can transport 200 pounds on the move. In addition to the new accenting, the Wilderness also comes in a new color called Geyser Blue, which is the shiny but non-metallic royal blue you see in the pictures. It looks fantastic.

The front and rear bumpers have been redesigned to increase approach and departure angles from 18.6 degrees to 20.0 and 21.7 degrees to 23.6 degrees, respectively. You get an extra 1.8 degrees of breakover angle too, for a total of 21.2 degrees. A tough-looking 17-inch wheel package with Yokohama Geolandar all-terrain tires completes the look. Oh, and it has little hexagonal fog lights that sort of look like flowers to set it apart from the regular model.

Engine, Performance, & MPG: All About The Dirt

Like the standard turbo Outbacks, the Wilderness comes with a 2.4-liter horizontally opposed turbocharged four-cylinder engine delivering the same output at 260 hp at 5,600 rpm and 277 lb-ft of torque, the latter at 2,000 rpm. A continuously variable transmission sends power through the company's Symmetrical All-Wheel Drive system. But while this may seem like regular standard fare, Subaru has revised key aspects to improve the Wilderness's off-road performance.

It installed a revised rear differential with a final drive ratio of 4.44:1, and the CVT was adjusted to match this final drive at the front axle, too. Subaru says this combo improves low-end torque and boosts its ability to climb grades, claiming 40% grades on gravel. We really couldn't feel much of a difference on the road, but when we tackled the hills, it was insanely adept. The improved torque delivery will also help in towing the Outback Wilderness's maximum of 3,500 pounds.

The improvements to its off-roading ability come at a price, however, as fuel economy takes a hit. The Wilderness has EPA ratings of 22/26/24 mpg city/highway/combined compared to the regular turbo models' 23/30/23 mpg estimates.

Walking up to the Wilderness, the first thing you'll notice is the increased ride height. The bottom of the vehicle looks like it's at your knee. But slipping into the water-resistant seat and firing up the Boxer engine feels very familiar. Despite the engine being turbocharged, the CVT seems to dull the mill's power delivery. To get it going you have to floor the throttle, and partial throttle yields mixed messages with the CVT simulating an upshift when you really wanted more thrust. But if you do floor it, the revs shoot up and the speed increases, with faux steps in the revs designed to make it feel a little more like a traditional automatic.

Spending 45 minutes on freeways and regular streets, the most noticeable difference between the Wilderness and a standard Outback is just much body roll the increase in ride height has created. The standard Outback has never been a sports car, but it typically behaves well and responds well to steering inputs. This taller wagon feels truly SUV-like in its insistence on swerving down the highway, although in fairness, it was an extremely windy spring day on which we drove the car.

On-road, the whole package felt a little too tall top-heavy. Off-road, however, it was a different story.

Here the Wilderness excelled more than any wagon, and indeed more than many an off-road-biased crossover that we've driven in a while. Subaru's X-Mode off-road mode has been adjusted for the new vehicle. It's standard here and includes Snow/Dirt and Deep Snow/Mud options. A new advanced feature for X-Mode, exclusive to Outback Wilderness, allows the vehicle to switch automatically from low-speed managed driving to speeds over 25 mph without interruption of power or performance.

That's the mode that we stayed in at Holly Oaks ORV Park in Oakland County, Michigan, where Subaru set up shop for the week and laid out a 25-minute trail ride that showed how the Wilderness attacks the dirt, mud, and sand.

We climbed 40-degree inclines, using the front camera to see over the huge crests. As long as we kept our foot down, the Outback clambered up like a mountain goat. The declines were almost more impressive as we tried out the hill-descent control. Basically, whatever speed you go over the crest at is what you'll creep down at. Despite some seriously steep declines, where we could hear the antilock brakes jockeying for grip, at no point the Wilderness feel out of control.

It was just as fun as the fast, sandy parts of the trail, where we were allowed to give it some gas. With all-wheel drive kicking up four rooster tails of dirt, the Outback was in its element. Even as the dirt and mud became deep, X-Mode just kept us moving. It was quite impressive, but then again, so is the normal Subaru Outback.

In the cabin, the Outback Wilderness uses Subaru's StarTex water-repellant material with embossed Wilderness logos in the headrests. They get copper color weave to match the exterior accents and are nice and grippy, useful when gravity is trying its best to displace you with the nose pointed at a 45-degree downward angle.

There was a ton of room in the second row for a 5'10" adult behind a similarly-sized driver. The measurements are 39.5 inches of legroom, 54.8 of hip room and 39.1 inches of headroom. Those rear seatbacks were covered with more water-repellent fabric and the roof liner is black to resist smudges from bike tires or other equipment.

To fit bikes and camping equipment in, cargo volume measures 32.5 cubic feet behind the second-row seats and 75.7 cubic feet when the seats are folded down. Maximum cargo length is 75 inches.

Subaru always comes through with a ton of safety tech (remember the beeping?), which is good, in the grander sense, though sometimes annoying the short term. It comes standard with pre-collision braking, blind-spot monitors, and lane-keeping assist. Reverse braking assist is optional. It also features a screen in the gauge cluster to tell the driver which systems are active or waiting in the wings.

The Outback Wilderness comes standard with an 11.6-inch, portrait-style infotainment system with touch controls for multimedia, air conditioning, X-Mode, and other settings. It has Apple CarPlay, Android Auto, and Bluetooth. A rearview camera is legally mandated, but standard fare also includes four months of satellite radio. The top-of-the-line 11.6-inch Multimedia with Navigation is available as part of an option package that also includes a power moonroof and reverse automatic braking. The Wilderness gets a special X-Mode display with a new roll-angle indicator to help the driver navigate off-road terrain.

As much as we love wagons for their car-like ride quality and SUV-like space, we much prefer them in the sportier variety, thank you very much. The last few Outbacks we've driven were great on the road and still good on the dirt, and that might be the sweet spot for us, and for most Outback buyers. We feel the improvements made won't be noticed by many, and the on-road behavior's sacrifice for the sake of off-road prowess is only worthwhile when tackling mud and steep inclines.

The questions you must ask yourself are: do I like the styling? Do I need the extra ground clearance? Do I plan to get this interior muddy? If the answers to those questions are yes, get the Wilderness. If you like more car-like wagons and only go off-road occasionally, then we'd definitely recommend one of the other turbocharged Outback options.

Perched near the top of the 2022 trim ladder, the Outback Wilderness carries a pretty hefty starting price of $36,995 compared to the $35,145 asking price of the turbocharged Onyx Edition XT on which it's based. Compared to the starting price of the 2022 Outback lineup ($26,945), the Wilderness represents a pretty hefty price premium. However, the Limited XT and Touring XT are more expensive still at $37,995 and $39,945, respectively. Destination and handling across the range add another $1,125.

For the money, the Wilderness is well equipped, though, and you get Subaru's most off-road ready Outback ever made. Stick with the blue if you want to show off, keep it black if you want to hide the fact that this station wagon will outrun any soft-roader in the dirt, and some hardcore off-roaders too. A lone options package exists in the form of a $1,845 add-on that equips a power moonroof, 11.6-inch nav screen, and reverse automatic braking. 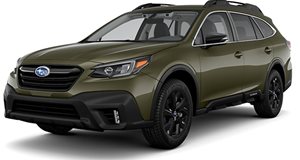